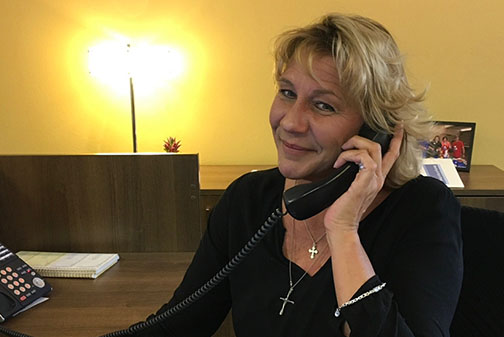 Born in Nebraska but lived there only six months before family moved to Houston. Then family moved to Jacksonville, Texas. Majority of her life in East Texas, went to college in Tyler. Worked in newspapers for many years. She went through a divorce and custody battle, and during this time she began using alcohol, pills, then drugs. She lost her marriage, lost her job. “I kind of lost myself.” What filled the vacuum was alcohol and pills, then lots of drugs. She went to jail and eventually to prison.

Her released from prison brought her to Abilene to the New Beginnings. She knew then that going back to East Texas was not the best solution for her. Came here in September of 2015.

Reflecting back, were you ready for a change?

“Before I was arrested (the last time), I prayed to God to stop the cycle, to make everything stop.” Only about a week later, she was pulled over in Tyler. “When I saw the lights, I knew. I had drugs on me … and I didn’t have a driver’s license.” And the policeman knew her from an earlier run-in. She was in the back seat of the police unit, leaning her head against the police dog cage. “My first thought was that I was going to prison. My second thought was, ‘Well, this is what I prayed for.’”

She was in prison for two years. New Beginnings brought her to Abilene. One of the requirements was that everyone works. She worked in the kitchen at a restaurant for nine months when it was suggested that she check out FaithWorks. She was the first student at FaithWorks who came from New Beginnings. In summer of 2016, she came to FaithWorks. She said she wasn’t looking for a job – she can get a job – but she was looking for a path to The Job, a career meant for her.

What do you remember about FaithWorks in the summer of 2016?

“Well, I remember Paul, of course, who was my teacher.” She remembers the students who went through the classes. “As excited as I was, I remember being skeptical” – because she thought the program would benefit the others – but wasn’t sure it would benefit her as much.

“I could see the benefits of the program, but in the back of my head, I was skeptical.” “When they passed out the criminal records, mine was the fattest envelope. And I didn’t think FaithWorks could overcome that.” Did they? “Well, yeah! I participated in that. FaithWorks gave me strategies, they gave me guidance, they gave me help. And they gave me the responsibility of doing it for myself.”

She learned the full value of FaithWorks after she graduated. “I come back here a lot, and I tell students to trust the process because sometimes when you’re in the middle of it, you don’t see.” She did her internship with United Way. During the classes, there wasn’t any one thing that singularly stood out. “I would say it’s the way it all worked together. It all worked so well together.” From group counseling to individual work, the Seven Habits book, conflict resolution, Gospel of Matthew, all of it. She would take things she was learning at FaithWorks back to the others coming through New Beginnings. “I thought they could all benefit.”

After FaithWorks: She went back to her same job, working at the restaurant (Lucy’s) at night, which she kept throughout her time at FaithWorks. “So I didn’t get to see the short-term benefit; I had to wait for the longer term.”

She quit that job in January 2017, and she then started spending more time helping at FaithWorks with Joyce Dalzell.  Lori said she needed help overcoming a “lack of direction, purpose and faith in life.” “You’d better be able to do something about that vacuum when you find yourself.” That’s when her relationship with Joyce grew. “She’s great with ideas and direction and keeping you busy.”

When she really knew that the FaithWorks principles were working and that her life was turning around is when her internship supervisor from the summer of 2016 called her several months later and said she had a job she wanted Lori to apply for. Several people helped her apply for the federally funded AmeriCorps VISTA program (Volunteer In Service To America), a one-year paid Peace Corps-type job completed within the nation. United Way’s Cathy Ashby wanted a VISTA employee, specifically Lori.

Lori had taken her internship seriously. “I think they were surprised at how seriously I took it (the internship). It was a job, whether it paid or not. It was a job. So that benefited me.” Her internship at United Way was the first by a student at FaithWorks.

There was an extensive application process and numerous regulations for the VISTA program. “I went through the whole application process and put down every single criminal conviction, which is upsetting.” Later the VISTA supervisor called and said Lori was turned down because of her of the length of her criminal record and time left on parole. Lori was very upset and probably would have given up then. But she was told she could appeal the decision. Several people wrote letters on her behalf. So they fought that decision, and she was later accepted. She said she became the first person on parole in the state of Texas to be permitted to participate in the VISTA program, “which has opened huge doors for me.” She spent her year working for the United Way in Abilene.

“I knew beyond a shadow of doubt that without help from Joyce (and FaithWorks), that I would have quit because the moment I heard ‘no,’ I thought, ‘Well, that figures.’”

Where does FaithWorks fit into her story over past few years?

“To me, it all fits together. When you look at New Beginnings, United Way and FaithWorks, it’s hard for me to tell you where one ends and one begins – because they were all there pouring into me. FaithWorks definitely gave me this whole other avenue.” One of the roles of New Beginnings is to keep people safe, provide a safe place for those returning to society from prison. “I learned here at FaithWorks is another group of safe people. By extension, I found my church, which gave me access to another group of safe people.” She goes to Highland Church.

“FaithWorks opened a whole new world to me. It gave me people in Abilene. I’m still surprised about being around town and knowing people. And a lot of those connection can be traced back to FaithWorks.”

What would to tell to someone about FaithWorks?

“I tell students all the time to trust the process.” FaithWorks helps with specific life and career skills, but some people already have those skills. “I see such a bigger picture here. FaithWorks is a career development training program, and the goal is gainful and long-term employment. But to me it’s so much more. It’s walking in my path, walking in God’s will, knowing what’s out there for me. It’s knowing it’s never too late to become someone better. It’s the Jeremiah 29:11. It’s all of that.”