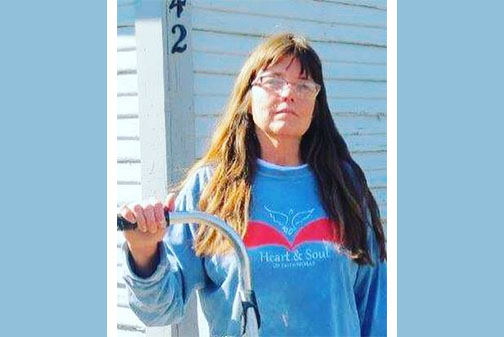 Bonnie Gallion heard about FaithWorks a lot before she came. But it wasn’t until she was in the Taylor County Jail that she said she took the time to consider it seriously.

First of all, it was about faith, and “faith and drugs don’t mix,” she said. An Abilene native, Bonnie was sitting in jail on a charge when a FaithWorks pamphlet fell to the floor of the cell from a Bible.

“I had plenty of time to read the pamphlet, and I knew that’s just what I needed. I didn’t know how to get started, but I knew I wanted to.”

Bonnie got on her knees and said a prayer: “Lord, you took me to jail; you got me out of jail – so now what?”

She really didn’t know, she said. But she got on her bicycle and rode to down Mockingbird to FaithWorks

Bonnie was raised in a violent home. Her father was abusive to both she and her siblings and her mother. “My mom had four kids, and she felt like she could not move out on her own,” Bonnie said. “So we dealt with a lot, and it became normal for us.”

It also became a pattern she took up in her adulthood.

“My first boyfriend was very violent,” Bonnie said. “I didn’t think so at the time because he wasn’t as violent as my father. It took me years to realize I shouldn’t have to deal with that.”

Bonnie attended Anson High School but dropped out in 10th grade. She finally earned her GED in 1991.

In her early adulthood, she gave birth to three boys and left to live in the San Antonio and Austin areas for 18 years. She spent some of her adult life on drugs, with arrests and jail time thrown in as part of that life. From 2004 to 2017, rarely a year went by that she was not in some kind of legal trouble. Until, she said, she found purpose at FaithWorks of Abilene.

“I learned more about God, which was a blessing because I really hadn’t had that experience in my life,” Bonnie said. “But they also taught me patience, respect, computers and how to do resumes. If you stick it out, it’s so worth it, even when there are times when it’s tough.”

Bonnie did her internship in the City Neighborhood Services department at the City of Abilene, which was, at first a struggle for her. “I chickened out one day, but I swallowed my pride and went back the next day,” she said. “I panicked and left because I felt I didn’t know how to do something they asked me to do.

“It was hard to go back, but I’m grateful I did,” she said. Her co-workers treated her the same, however. They were forgiving and welcomed her back. She says now: “If you don’t understand something, just ask.”

She now works full time in maintenance for Dave Dalzell, who owns houses and apartments, where she was trained on the job.

“He gave me a chance when I thought no one else would,” she said. This, coincidentally, helped her in her relationships, too.

“I used to think that you had to have a man do things for you. Well, I’m going to tell you right now, I’ve learned. You don’t need a man. You can do it yourself, ladies,” Bonnie said.

Ultimately, she said that FaithWorks helped place her back into reality. “That’s really a good place to be,” she said. “I feel alive, and I feel loved.”