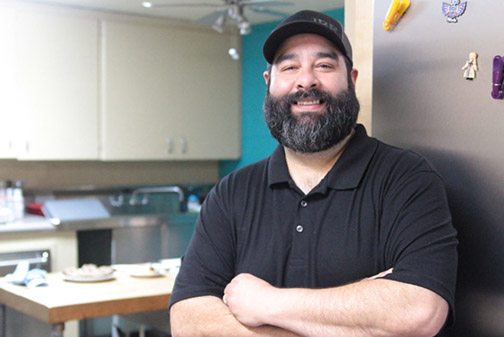 God had to tell Zacheri four times to go to FaithWorks before he finally paid attention. He heard about it the first time during his inpatient time at a local drug rehabilitation center, but he put it off.

After three more times, and three more people mentioning FaithWorks to him, Zacheri finally read the brochure and took a leap of faith. “If you’re willing to follow those small nudges He gives you – or, for me, almost slaps in the face,” he said. “You, too, will find purpose and worth like I did.”

Zacheri went to Serenity House to overcome a years-long addiction to alcohol and painkillers. He knew the path his life was taking was going to kill him. And, at times, that’s just what he wanted. “At one point I was taking handfuls of painkillers and chugging vodka,” he said. And I was praying I’d never wake up.”

He fell into the lifestyle he was living naturally, he said, because it was just part of what his family did. That upbringing led him down a path of addiction. “If you could abuse it, I would abuse it,” Zacheri said.

Once he sobered up and moved to his biological father’s home, he had time and space to enroll in FaithWorks. But he also felt the Lord’s pull on his life. “I didn’t know why I came to FaithWorks,” he said, “besides knowing God was leading me here. I know there are defining moments in your life when God wants to do something.

“If you’re willing to follow those small nudges, He will reveal it to you.”

By the end of FaithWorks, Zach became Zacheri. “Zach wasn’t always the best person,” he explained. But Zacheri is part of his maturation and transformation to living for Christ. Zacheri knew he was called to Christian ministry. “Through FaithWorks, I found worth,” Zacheri said. “I found a sense of purpose.”

Zacheri did his internship at Region XIV Education Center. After FaithWorks, he attended Sunset school of preaching and served in various ministry roles. He also worked in two food and farming businesses. In 2019, Zacheri came full circle and returned to FaithWorks as meals and kitchen coordinator. He also serves as a minister at Mission Abilene.

“I learned who I am and what I stand for,” he said. “I feel like I’ve developed a mission statement through FaithWorks: faith, family, and food. FaithWorks helped me become a whole person of what God really intended me to be.”