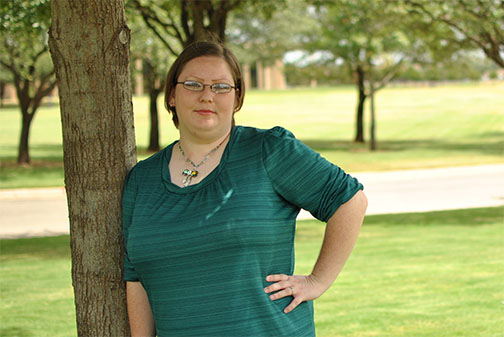 Before FaithWorks I was raising my niece and nephew and taking care of my two younger sisters because my mom had ovarian cancer and my dad was a truck driver. I moved from one dead end job to another. I had very low self-confidence. I was on the brink of giving up

I believe that angels are everywhere. I was at a gas station talking with a friend about not being able to find a job, getting a Big Gulp, when someone overheard us, and she told us about FaithWorks of Abilene. On our way back home we talked about how it couldn’t possibly be real because who would help someone like us find a job, give us skills we were lacking or even better, help us realize not only what we want to do, but what we’re capable of doing with our lives. We ended up filling out an application and started class the next week… we were still skeptical.

During my time at FW I lived in Tye. I woke up super early every morning and drove my dad to work which was near Anson, took my sister to school in Eula, my niece and nephew to day care, and myself and a friend to FW. Then at the end of the day I had to drive to Eula, then nearly to Anson to pick up my dad and make it back in time to pick up my niece and my nephew from day care. I was constantly on the go.

At FW I had a new type of family. It was my spiritual family which included my classmates, Joyce and the other FW staff members, and an amazing mentor by the name of Terri Simons. My parents were not supportive during my time at FaithWorks mainly because they felt I was wasting my time. However, after even the first day of class I knew my life was a gift and it was given to me by God. I knew He had a purpose specifically for me.

At FW I learned that working with children and families was my calling and I interned at Day Nursery of Abilene. After graduating from FW in December of 2005, I landed a full-time job at the same place. After a while, I was talking to another employee about wanting to return to school when a parent of someone in my class overheard the conversation. She told me to write a letter about what I wanted to go to school for and why I would benefit from any aid. I gave her the letter the very next day and later she said, “My father and my mother would like to talk to you.” The next thing I knew I heard these amazing angels on the phone saying that they wanted to help me go to school. My mind was blown. First, someone changed my life by referring me to FW, then grandparents of a child in my class help me make my dreams actually happen! Still even to this day when I think about the people that have truly blessed me and how I got to where I am, I get tears in my eyes.

I am working on a project right now with a friend to open a nonprofit 24 hour day care center in Abilene, with a classroom for teaching parenting, financial planning and relationship building skills. My goal is to provide quality child care for all ages and developmental stages during both traditional and nontraditional hours as well as help strengthen families and be able to help them find additional resources within the community.

I truly believe that without FW my life would be headed down an entirely different path than it is now. I thank God for the people who have come into my life every day. Without FW I wouldn’t have been working at the day care and met an amazing family who has given me a future. I wouldn’t have graduated from ACU and continued on to TWU for graduate studies, and I wouldn’t be planning to open the family resources and child development center either.

So now I want to leave you with some things to remember: Never give up on yourself. Never think for a minute that you’re worthless. And most importantly, never forget that He has a plan for you, and it is a good plan.

“For I know the plans I have for you,” declares the Lord, “plans to prosper you and not to harm you, plans to give you hope and a future.” Jeremiah 29:11