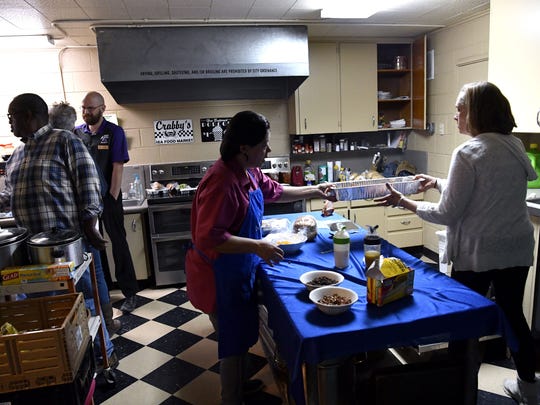 Organizations and individuals met early Monday morning at the Abilene Public Library to discuss homelessness in Abilene and to strengthen networking to allow for positive outcomes.

Taking a “Coffee and Conversation” format, Monday’s meeting saw those attending submit questions about homelessness, resource availability, etc., while taking regular breaks to network among each other.

Jared Armstrong, project coordinator at West Texas Homeless Network, said the meetings, which will be monthly, have a broad goal of helping organizations and others learn about mutual resources.

But another hope is that homeless individuals needing aid will attend, he said.

“There are a lot of our homeless neighbors that live around this area,” Armstrong said. “They can come in, get coffee and engage with people one-on-one. It’s a place where they basically feel welcome and (understand) that people care about them and what’s going on.”

Challenges discussed Monday ranged from finding professional clothing for job interviews — local groups such as FaithWorks of Abilene or the St. Vincent de Paul Society were mentioned — to immediate housing.

Emergency shelters available in Abilene such as the Salvation Army, the Noah Project and Abilene Hope Haven’s are in short supply, meeting attendees said.

And, options available are often highly “contextual,” meaning that they are designed to serve particular populations.

For example, Noah Project’s shelter is available to those who are fleeing physical violence, while those dealing with recovery from alcohol or drug abuse may need to seek help from other, specific resources.

Joyce Dalzell, executive director of FaithWorks of Abilene, said she had learned from Abilene Recovery Council representatives about how that group can help her group’s clientele connect directly to recovery services.

“They have a connection there, and probably a third to a half of our folks are in recovery,” she said.

Jorita Hagins, a volunteer with City Lights, came Monday with the hope of pointing out the need for more immediate help for those living on Abilene’s streets.

Homeless people often struggle with specific challenges such as mental illness and lack of basic resources, she said, and sometimes find themselves bounced from group to group in their attempts to seek help.

“We have so many tents around this town, so many people sleeping underneath bridges,” or “anywhere they can,” she said.

“We have organizations that try to help other people, but we need to reach …. a little bit deeper,” Hagins said.

A few individuals seeking help attended Monday’s meeting, such as one man who told about being displaced from his home by a flood last year in Marble Falls.

He arrived by bus in Abilene about a week ago because of previous connections here, he said. Before the meeting’s end, the man was discussing his options with nonprofit representatives.

Future Coffee & Conversation sessions are scheduled at 9 a.m. the second Monday of each month at the Abilene Public Library’s downtown auditorium, 202 Cedar St.