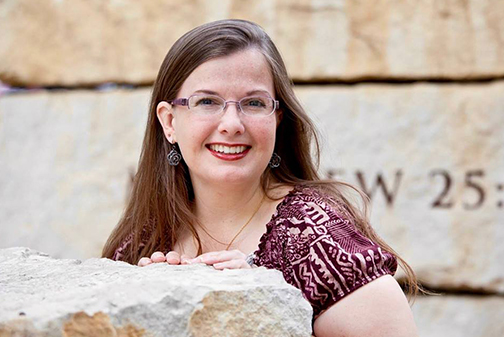 Angela Humphries came to FaithWorks of Abilene after serving 18 years of a 60-year sentence in prison. Her childhood is a story of sexual and physical abuse that turned into a destructive path culminating in some serious charges.

Raised in Denton, she relocated to Abilene upon her release, which is how she came to FaithWorks

Angela Humphries landed at FaithWorks after an 18-year stretch in prison. Her childhood was one of abuse and her conviction, at 20 years old, was the result. She needed a program like FaithWorks to continue her walk in faith she discovered in a prison cell.

Longtime FaithWorks volunteer Linda Coleman introduced Angela to the program. “When I first came home and moved here, it was a big culture shock for me.”

Angela earned three college degrees while in prison, but she was out of society for a long time.

“I had that education, but being locked up so long, I didn’t have the social skills to deal with society,” she said.

Angela interned at the Department of Aging and Disability Services. After that, she continued to volunteer there while she was waiting to find a job. She had a good relationship there, but the state wasn’t hiring.

“If they could have hired me, they would have, but they were already cutting staff,” she said.

Her supervisor knew of her past and still would have hired her – so that helped her overcome the fear of how future employers might react to her when she told them about her past. Classes in prison had emphasized not lying about her past.

Angela would visit the Christian store Mardel frequently, begging for rides to shop there. She visited so often, in fact, that the manager got to know her by name. One day as she was checking out, Angela’s grandmother blurted out, “Are you hiring, because she would love a job here.” Mardel was not hiring, but a few months later she was hired part time.

“I was open and honest about my past and I gave them a bit of my testimony,” Angela said. “They were moved by that.”

Angela worked hard, moved up the ranks, was hired full time, and was promoted several times, finally reaching the position of bookkeeper. “A convicted felon handled all the cash for the store. So that was awesome!” In April 2018, she was promoted to assistant manager.

She credits her journey in the free-world to God first and FaithWorks second and holds fond memories of her time there.

“We were like a family that whole semester. I was new to the world and didn’t know how to deal with people very much, and the atmosphere at FaithWorks was just like family. I could be me and I could tell my story,” Angela said. “When I first came home, I thought I had ‘convicted felon’ written on my forehead and anybody who saw me knew I’d been in prison. But that wasn’t the case. In fact, it shocks a lot of people when I tell them.

“I came home worried about what people would think of me because I had been in prison.”

She wasn’t sure about how people would react to her, how she could get a job or how to deal with people who didn’t know her. “FaithWorks helped me overcome that.”

Her favorite activity was the life maps exercise, in which students create a map of life before, during and what is hoped for after FaithWorks. “For me it was like three compartments. One was just darkness because of everything I had gone through with the childhood trauma.” Prison was her second stage, like the cocoon stage of a butterfly, she said. “A butterfly has to go through all of that work in the cocoon before it can become that butterfly.”

And afterward: “It’s such a freeing feeling. FaithWorks helped me grow even further in that foundation: I became the butterfly.”

Angela is now involved in faith-based ministries serving women behind the walls and beyond. In prison, she signed up for a 15-month program studying the Bible and living with others of faith. After that, she was released back into the general population to be a disciple. She was in the first faith-based program on the Mountainview Unit in Gatesville.

“That program is what solidified my faith.”

Angela credits FaithWorks for her foundation to walking in freedom. “Between my husband’s family and FaithWorks, they were my biggest rocks when I came home. I was scared to death after doing so much time. I knew I had my husband’s family. They would come visit me, so I knew them. But at the same time, I didn’t know how to deal with society.

“FaithWorks was my biggest rock to help her transition into a normal adult life,” she said.