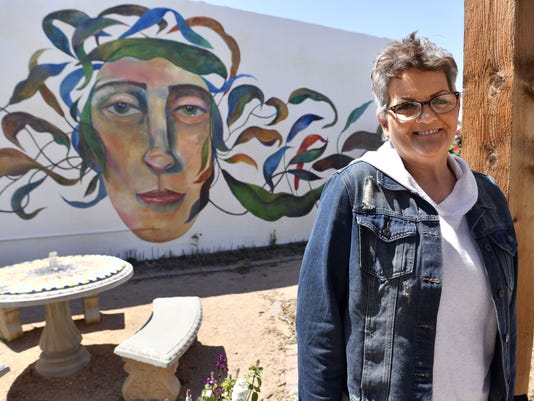 Terri Curry’s story is the same, with some variations, as everyone else who walks through the doors of FaithWorks on North Mockingbird Lane.

Curry had gotten clean from a heroin addiction but didn’t know what she was going to do for a living when she saw a pamphlet for FaithWorks at a church. The next day, she was at the front door. Although the class already was in session, Curry was allowed to join.

That could be the motto for FaithWorks director Joyce Dalzell, too. The inspiration for FaithWorks came from a man who had just returned from setting up computer training at a mission in Zambia.

FaithWorks didn’t turn out to be a computer training program, but that’s the spark that got the ideas flowing. In January 2003, FaithWorks opened it doors to eight women who formed the first class.

Since then, 537 students have come through the doors, with about two-thirds of them graduating from the 13-week curriculum.

On April 24, FaithWorks will celebrate 15 years of service with a dinner in the Hunter Welcome Center at Abilene Christian University.

A special attraction of the evening will be watching Cuban-American artist Rolando Diaz create an oil painting that will be auctioned at the end of the program. Diaz, an ACU graduate who lives in Dallas, also painted a mural, “Mother Earth,” on the north end of the FaithWorks building.

“The idea was to bring light to the organization,” Diaz said, while finishing the mural in December. “I decided to donate the mural to the cause.”

Diaz said the original artwork that he will create during the dinner will be similar to works he has created during concerts by artists such as Ricky Skaggs and Amy Grant. He listens to the music, gets inspired and paints.

“If I make a mistake,” he said, “people are never going to know.”

It’s doubtful Diaz will make a mistake, but even if he does, it won’t make any difference to the dinner guests, who will be there to raise money for a favorite cause.

From hope grew faith
That favorite cause began to take form when Highland Church of Christ, where Dalzell is a member, donated $3,000 startup money. Dalzell used the money to go to Memphis, Tennessee, to see a similar program called HopeWorks and to purchase the same curriculum.

“Most of what we do is what they do,” Dalzell said.

Dalzell and four others, all with different areas of expertise, met every other Monday for breakfast and brainstorming for a year and a half before opening their doors to that first class of women.

Today, classes are limited to 15 members, with some exceptions. Students have to be at least 18 to enroll, with most of them being older. Sessions are held in the spring, summer, and fall. This summer, however, will be spent in strategic planning instead of holding classes. Thanks to donations and grants, no tuition is charged.

Classes meet 9 a.m. to 4 p.m. Mondays through Fridays and include breakfast and lunch. The meals serve as a bonding time, plus the students learn about good nutritional habits.

The days are spent in life skills training, and devotional and prayer sessions. The course also includes serving 15 hours in an unpaid internship with a nonprofit or business that meets the student’s career goals.

Students such as Curry can attest to the impact of the program, which goes beyond training. The spiritual component is essential.

“My parents never mentioned God,” Curry said. “I have a personal relationship with the Lord now.”

Curry, who once had a career as a hair stylist, came to Abilene in 2013. She got a job at Serenity House treatment center but quit after a relapse. Once she was clean, she was too ashamed to go back.

But now, she is serving her internship as a life coach at Serenity House. Her goal is to become a professional life coach. Curry credits FaithWorks with the path she is on now, a path she vows not to stray from.

“I intend to stay clean,” she said, “and live a life of joy and peace.”